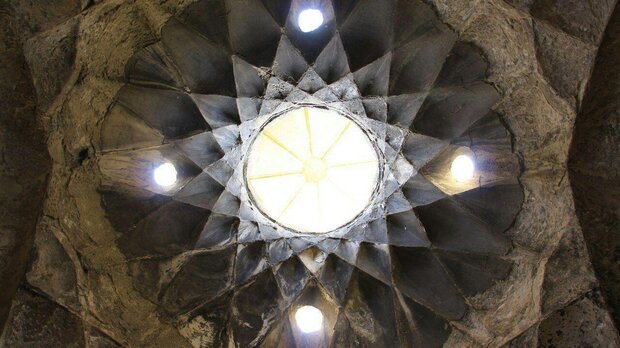 1.bathroom Agha (Bath Agho): The Upper Bath in the neighborhood and in the vicinity of the mosque of Imam Reza (mosque eunuchs), respectively. Apparently, the founder and owner of the famous family’s eunuchs assigned. But its last owner, Haj Mohammad Taqi was clean. Quoted the bathroom, monolithic stone columns had been buried after the destruction of the rubble bathroom. Perhaps if the location of the remains of the bath (which is located at the edge of the road Solids) is drilling, the columns to be discovered!

2. bathrooms lootiha: The bathroom in the neighborhood on the Upper and martyr Imam Reza was that the streets were Hamidi field. Founded and owned by RAHIMIAN attributed to large families. Appellation that neighbors bathroom shower because some of the musicians who were known in opioid called reveler.

3. Bath Ghale: The bathroom is very old. Its founder Kalbali Khan Afshar Kazerouni (Hesami), respectively. The building is now owned by M. Golshan is a remake of it, still remains. The bathroom at the intersection of current Guidance Crossroads (Upper Town) is located.

4. Bath ghotb: the shower mosque in the northern part of the Upper Atmospheric quarter. Its founder was dedicated to the elders of critical attribute. Turabi was responsible for the individual’s name. Haji Dad trimming the last person who ran a bath for rent.

5 bathrooms Molababa: The bathroom cleaning belonged to Haj Hussein was devoted to it. The bath Administration of Cultural Heritage monument sign is still standing and in compliance martyr adjacent streets (near the mosque in the neighborhood of climate blacksmiths) is located. Unfortunately, the cultural heritage of the acquisition and restoration of the building has not done anything!

7. Bath Nov: near the bathrooms were blacksmiths and was owned by Abdul Latif voice.

8. bathroom jofti: two rooms side by side (one for men and one for women), who at the intersection of Revolution Square (neighborhood market) has been named as the new building for Shapoori now set and active. The owner of the Haj Mohammad Taghi brave.

9.  bathroom madreseh : The bathroom is located near the seminary Salhiya (neighborhood Dome). The new building it now remains active. Haj Ali-Qoli Khan Afshar its founding Kazerouni (Hesami), but newly renewed building that was owned by the late Karbala’i Qanbar Golshan Bath and is now run by the descendants of the deceased.

12. Bathroom Tovfighi: building dome in the neighborhood and the streets were firm. Property was owned by Haj Reza success.

13 bathrooms Moghaniha: the building next to the mosque Bibi Parrot (current Zainabiyya in the neighborhood mosque dome), respectively. Hmamdar it Alimorad Haj and Haj Ali Mohammad …. Was.

14 bathrooms Dalakha(Kooshesh) building at the beginning of Shuhada Street South (alley Tabatabai), respectively. It was waqf property and Hmamdar the Haj Reza Amari.

15 bathrooms Golshan: the bathroom in the southern part of Gazra (handout below) in the neighborhood preparedness (Lane s), respectively. Property owned by Haj Fazlolah was brave.

16- bathroom Derakhshan: in the street in front of the cinema and in the vicinity of the mosque of Imam Hassan (AS) (Neighborhood preparedness) was changed and its owner Haji Rajab Ali and Mohammad Taghi ancestors and Hmamdarhay it was successful.

17. Bath Bashgah: The bathroom belonging to army officers at the beginning of Hafez Street North (in the southern part of Bank Saderat), respectively. Later Gholam Hossein Shojaei had been leased.

18 bathrooms Baharestan: The bathroom has two buildings were men and women. Shrine building of streets (neighborhood preparedness), respectively, and owned by Haj Fazlolah was courageous and children.

19. Bath Namaki: building near the mosque, Sayed Ebrahim (current religious site where the mosque) was located. It was also endowed property.

21. Bathroom Soleymani: The bathroom next to the shrine of Abu (Neighborhood Market) was that the property was owned by the family Soleimani.

22. Bathroom Hoseyniyeh: The bathroom on the ground next to the mosque WORSHIP market and the market. It was recently named for the famous Tavakoli.

23 bathrooms Sarchy Khanom: The bathroom was on the market WORSHIP. It was waqf property. Hmamdar Mashhad Ali was barley.

Most bathhouses opioid building was built in such a way that the floor is below ground level, so that some level of the surrounding ground level or slightly higher roof bathroom. That is why the roof of the bath became a place for children to play! Domed skylights named “were randomly collected” on the bathroom ceiling was visible from long distances.

Had two separate baths building courtyard, vaulted ceilings and corridors and the courtyards inside the door, a vestibule and Gchkaryhayy Kazerouni was built with architectural features. The middle of the courtyard entrance, there was a pond that borders around the dock and into the courtyard, two or more corridors vestibule called Binet (break) was built. Each sees a niche or embedded in numerous lockers to accommodate customers inside their clothes. Binet and in front of the dock, a small stone platform was given to a person who was out of the shower and stand on your feet washed and cleansed the platforms.

In the following platforms any proof, puncture dilatation had been built to accommodate shoes and slippers. Bathroom customer when entering the bath, usually with evidence-based guidance Hmamdar in one of his legs and his clothes in the closet and close the window or limp fabric from Hmamdar was delivered into the main floor and the bath was built. The customer in addition to Lang, other requirements (top and passion flower head and Noora, etc.) received from the bathroom. Although some customers, especially women and children the necessary materials brought with him to the bathroom. The main floor bathroom in a corner of it, a relatively large tank full of hot water to the treasury (treasure) there. Cases water temperature above fifty degrees Celsius and sometimes varied. Customers bath when they were swimming in the pool.

Part of the inner courtyard bath to remove unwanted hair using Noora (Nvrhkhanh) was allocated. Metal containers in the bathroom (or mud) was named Mshrbh by which the Treasury for body wash, water was harvested.

The bathroom several workers (tonsorial) drag and shaving bag work performed. Presence in the shower sometimes took several hours, and customers who often were residents of a place, used the opportunity to chat. If an individual wanted to shower in the courtyard of devotion and kindness to another express, Mshrbhy full of water on his body was empty! This form of expressing love, respect elders and dignitaries took place more. Some young people before or after Kys·hkshy and, upon request, massage and rub their bodies were soft and tonsorial by moving the hands and feet and neck in different directions from their so-called fatigue out there!

Each client after bathing and clean and cleanse the body in the water pool or shower to dry off the moisture from Bath demand that tonsorial the floor with a loud voice or say the word “dry” the request to hear the bath leads. With a few towels or bath immediately enter the inner courtyard and towels were thrown on the client’s body. If the customer is in the early morning (before sunrise) came into the bathroom, with a cup of hot water from the bathroom was living. Word sentences “Afy Kamaleh” (bless you) to someone who was out of the bathroom, after greeting the pleasantries were common.

The floor of the bathroom and in the pool, the platform was built for prayer. At prayer times, especially in the first few hours of the morning, the men who came to shower after swimming and wash in the pool, located on the platform and they prayed.

If you had a family wedding, by appointment, for the wedding entourage had grazed it. Of course, the wedding was to take a bath with a special ceremony. If a woman gave birth in the family, after a few days the woman in labor and the baby’s relatives came to bathe in the bath (shower Reuven) inside the bathroom for health and the health of local labor and birth by a midwife (Mamchh) certain things took place. Or if a person was born after his seven-event, a distant relative or close neighbors and friends of the deceased, the family and relatives of the deceased to pay costs to the bathroom to bathe and shave the head and face are invited!

For warm water pool, a room for the name of Tyn (Tshkhanh) was in the treasury. Of course, in addition to a basement or another room for the fuel depot was built. Intermediary between water pool with exterior fireplace, large metal boilers that heat the fuel to the fire were to be guided by boiler-water pool. Tyn fuel bathrooms are usually flat or risk animals (skin paddy rice) was set up and at the end of the fuel used. In every bathroom, nursery worker was assigned to keep warm. The person by beasts of burden, carrying fuel to Tyn baths and constantly throwing fuel on the fire by pouring and it kept burning. For preparation of required treasury bathroom, relatively deep wells drilled near the bathroom that was installed on top of the wheel openings. A long rope to one end of it to the big Aquarius (dowel hole) and the other was attached to a horse’s body, was on the wheel. Workers horses in long and wide area called Garonne (Gavrvn) and was moving away and bringing it to wells, Aquarius plunges into a well and extract water was poured into the pond called Kerr. Kerr or tube water table was transferred to the Treasury.

Working hours baths, so that every day from morning until after sunrise and Thursday and Friday from dawn to sunset men, respectively (for men), but the rest days later from sunrise to sunset for Women accounted for risk of cancer (for women).

Of course, during Ramadan, bathroom has also worked late into the night. Usually in the vicinity of a bath, a hairdresser or barber shop, which belongs to the family of the bathroom was there. Some Hmamdaran (tonsorial) in the past, circumcision of children and phlebotomize (a type of blood-letting and old fashioned) did