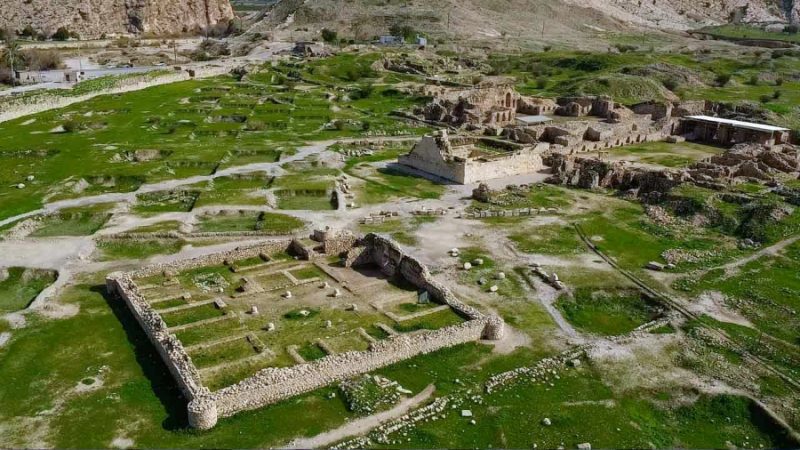 This historic town is about two hectares and generosity are located 23 km north-west of the present city Kazeroon. Bnabratlaat accurate and written in the city center on two columns a memorial written by the time of Shapur I (272-241 AD) and one of the most powerful Sassanid Empire and the second by a Syrian architect named “Apsay” was designed and built secretary. And the inscription On this, the 24th year of his reign of Shapur in Bishapour visited the city.

Regardless of the origin of the Sassanid lands of Fars, plenty of water, fair, fertile land, springs and natural barriers of the road king, made Shapur after the victory over Valerian Roman Emperor, the location for building upon the city its name, its choosing.

The city, along with cities such as pools, D round, Arrjan, Ardeshir leprosy of the most important cities in Fars province during the reign of the Sassanid and the reign of Bahram II boom to maintain, but then because of the king of the Sassanid to the West its territory ( Ctesiphon) was lower boom. With the advent of Islam in Iran began to boom and prosperity of the city disappeared clamps instead Gazrgah (Kazeroon current) is thriving, however Bishapour continue to survive, so that in the centuries-third to fifth moon praised the city of such great musicians, historians Vjghrafy pool, Ibn al-Balkhi, etc. is located.

Between 1319 – 1314 AH for the first time Georges year and Dr. Ghirshman delegates from the Louvre in Paris, to the operation of the archaeological excavations in this historical city began building Rafi and four phones that rocks “double” was built , Temple called the great hall and indoor wide as the palace of specific and more place to place offerings and a porch adorned with mosaic was introduced to the world of archeology and history. This drilling was stopped and not continued for 30 years.

The department of archeology and folklore decided to dispatch a team of Iranian archaeologists to supervisor Dr. Sarfaraz exploration drilling in Bishapour to shed light on the past and look to the structure of the city. In February 1347 archaeological mission in the city of Ahvaz were established and began to work. The operation about 10 years in the making that effort boarding archaeological mission, especially the Master of Dr Sarfaraz, fort city, temple, palace of Shapur, the mosque of the Islamic era, monuments and some valuable works of other heads of was excavated. The group also stopped operations in 1357.

Again in February 1375 under the aegis of Dr Sarfraz began drilling the city but stopped in May 1376 After several seasons of excavations were conducted by Mr. M. and New Year and the 1382 Mr. Amiri has been determined as responsible for the project Bishapour .

Historical city Bishapour grace the beautiful nature plain Shapur in plain green Kazeroon and rivers pleasant spring Sasan available to the left and use of forms and motifs other civilizations in the art, decorations and based on the desire and dream big dreams and ambitious king so carefully designed and executed with the most beautiful and richest cities such as Antioch beautiful bride cities of the civilized world since the Byzantine (eastern Roman) competed and it was.

City Bishapour According to the new plan (Hippodamus of Miletus) are rectangular and made habitable been to the seventh century. Two blocks north – south and east – west, the city is divided into four parts and each of these streets is one of the gates of the city. Main gate on the western side of the city that it is today, remnants of the bridge. The city is protected from all four sides. North Drzl girl and wall Castle tower, on the western side of Shapur River in eastern and southern sides, the moat has protected the city.

1 – royal citadel in Sassanid spectacular monuments such as the Temple of Anahita, Hall Shapour, Ivan Mosaic House include valerian, etc.

2. The public part of the city dwellers and the city’s Sytr and includes residential homes, public places, such as bathrooms, inn, markets, and so forth.

Masterpiece of carving Sassanid Shapur River in tight polo in the vicinity of the city Bishapour and Brkranh remains. Six reliefs on the sides tight polo is sculpted, as indicated victory and crowned king of Han Sassanid total number of six actors, three roles represents the victory of Shapur Roman Emperor Valerian. The three roles of the victory of Bahram II Bryaghyan crown Mars is the symbol of Ahura Mazda and friends first victory of Shapur II rebels and enemies. We continue to introduce some important parts of the city: