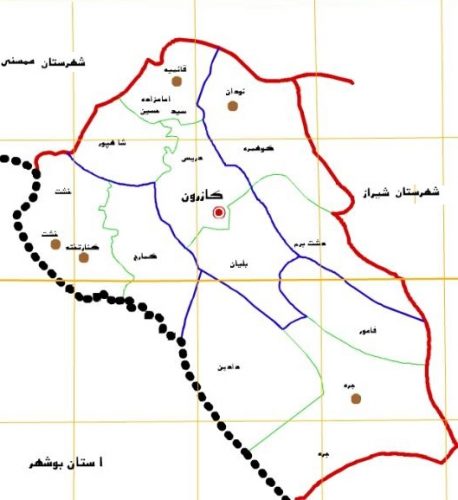 Name the historic city Kazeroon, the ” launder” and “Gazrvn” is taken, because at the time Dylmyan the textile factories in Kazeroon fabrics “distribution” and “Debicki” the tissue and export it, twelve thousand launderer the washing flax, lived in this city and therefore this city to launder the name of the city was known launder launder some texts to “launder” and “Kauzer” has come. “Launder” the pronunciation for “Gazrvn” and “Kazeroon” was distorted and now called “Kazeroon ‘remaining. In some books” launder “as well. Kazeroon by high quality fabrics with the City” Damietta “has Msrrqabt and therefore the” Damietta Ajam “also well known.

Balyani Amynaldyn Sheikh (Persian Sufi poet Hafiz and the great Khajavi and Professor Kermani), Sydaldyn Balyani Kazerouni (Greatest biographers of the Prophet), Taqi al-Din Balyani and many other family opioid Balyani celebrity in this period rose from the city.

Race the city Kazeroon, Hmanndmrdm southern Iran , race gamers or (Parasvazh) branch of race Ryast almost 3 thousand years ago the birth of their original home have come to Iran and the Gulf. Kazeroon people largely have maintained the originality of his race, because when we turn Kazeroon among them and their traits and habits of accurately put, a great affinity with the old Aryan race we see them. Local words and customs that have been preserved from generation to generation indicates this fact.

Persian is the language that the people of Iran, Afghanistan and parts of India and Pakistan to talk, barking originated. Words that are used in Kazeroon is close to the Old Persian language.

Dialects (Kazerouni, Devon, Dvsyrany, Bvrnjany, Abdui, etc.) customs, traditions, motels and the like existing in the region because of the specificity of language and ancient culture of this country, always considering Language has attracted to itself.

Before the Arab invasion Kazeroun and Shapur and other parts of the city, like all Iranian Zoroastrian religion, and especially in Shapur there are several large temples which traces its ruins remain. After the conquest of Iran by the Arabs at the time of the second caliph (13 AH) and capture Kazeroon Sardar sentence Ibn Abi Al-Aas, some of the residents of this village came to Islam. In the fourth and fifth centuries, and this number is high Kazeroon Zoroastrian Zoroastrian a man named Sun that he Daylam Gabr said the ruling was Kazeroon. Salman Farsi Kazeroun the first person in the service of the Holy Prophet (PBUH) and Islam took command of His Holiness the Kazerounian be exempt from the taxes and tribute.Most of the residents Kazeroon and around about the year 400 AH and from this year onwards due diligence Zoroastrian Abvashq son of Shahryar Sheikh Kazerouni Kazeroon people gradually became Muslim. Until the Safavid Shi’ism recognize the inhabitants of this land Shafi’i scholars were also arose among them. Today religion and religious fanaticism are all residents of Twelver Shi’ism. In Kazeroon religious minorities is low and in fact, 99 percent of people are Muslim Kazeroon city and the remaining one percent is of other religions.

Population size, sex and age structure, fertility, mortality rates and population growth are the underlying information that are important in determining resource allocation and growth rates. Focus on population and addressing the different dimensions of population provided the opportunity to rethink the past, the future and how to assess the population. For this reason, scholars and analysts by providing indicators and evaluation of demographic data, an important role in development today are responsible.

The city’s population of 266, 217 tons, which is the third most populous city in Fars province. The opioid city with 140 869 inhabitants, the second most populous city after the city of Shiraz province’s second largest city (in terms of area) is the province of Shiraz. Kazeroon city climate is relatively temperate. The city tourist areas, Iran is an important historical and archaeological and tourist sites and monuments it contains a lot. The historic town 20 km from opioid visible Bishapur.

Attractions of the city opioid such as the historic city Bishapur, Shrine of Syed Hussain, tight Tikab Inc., garden, statue of Shapur I in the Cave of Shapur and plains south of opioid in the Central Plains to go in Kvhmrh Nodan, Sar Mashhad and Lake distracted in teal and Baladeh noted.

Fountain Sassanid precious natural scenery around there and historic caves such as cave carved statue of Shapur I in tight polo that it is the natural attractions are the city Kazeroon. Shapur that the remains of a city built on the remains and ruins of the city Bishapur opioid that by Shapur I built palaces and monuments have many, along with several religious relic and historical dating back mostly to the ancient times reach the most important sights of the city are the opioid. Mashtan village has a secret attraction that winter and spring Khyrhknndhast.

The clay Konartakhte towns and many villages which include some of which include: Clay, Konartakhte, Burke (first, middle, and high), Shrine of Ali, Kmarj, Burki Ghaly, Bazin, Zanjan, left-e-Tel (Mafi e) , Gvrygah, Khajeh Jamali and …

The Clay attractions include: orchards and palm groves and recreational areas

Shrine of Ali (AS) has a very beautiful waterfall is in the mountains behind it open area that is very green. In Burke Middle Valley of Hormuz, which includes a historic castle from the period of Qian Qian pour Kingdom that it is not possible to go without climbing facilities. Qian known to pour the historic village Burki pre-Islamic Arab invasion and trouble with his pronunciation of the letter ‘p’ B Qian was read and change over time and dialects Burki was renamed. Seasonal river flowing in the valley of Hormuz . Some of the tourist attractions of the city Kazeroon include:

City opioid agricultural products include cereals, tobacco , dates, rice, beans, cotton, citrus, vegetables, some of these products are also among the city’s exports. On the other hand, in terms of the nomadic tribes in the region are sparse, animal husbandry and livestock production has a significant boom. A variety of dairy products, wool, skin and fat from animal products Kazeroon livestock sector.

Kazeroon spraying airport on the south side of the opioid.

Main shopping centers in the city Kazeroon The :