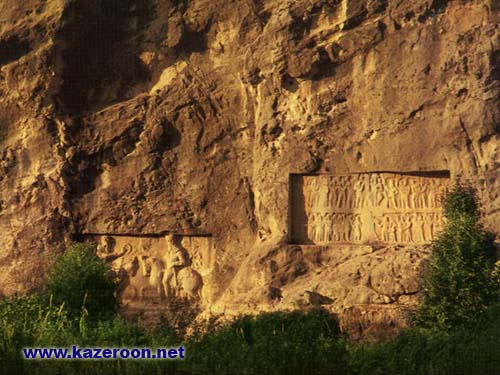 The prominent role that the larger role the Sassanid period, marking the victory of Shapur over Valerian (Roman Emperor) and five rows carvings. Iran’s regular army on the left side to the right side carvings and Roman captives who are bringing gifts to the court of Shapur.

The role of the Coronation of Bahram first. Brasb first ride on the right side of Mars are getting the Far Izadi is the symbol of Ahura Mazda. In this role, only relief pitchers bat in the line Sasanian Pahlavi inscriptions on Mars over the role and under his feet as his enemy carvings.

The role of the victory of Shapur II (Zolaktaf) rebels and insurgents on which is carved in two rows. Another Shapvrbzrgtr Svarbrasb shown in the central role, while the goddess of victory sits on top of the head Shahpur Rdrhal fly two large row Sassanid Shapur .psht head Horse Show Dhdvrvbrv five rows of people standing foot.

The normal role of the most prominent role Shapvravl tight polo victory over Valerian (emperor) shows. As referred to in the two rows of carvings, Roman captives on the right and on the left of Iranian troops are seen.