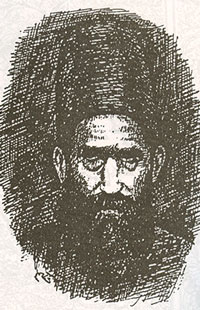 Sheikh Abdullah Sheikh Mohammed Khan Kazerouni known as the divine son of Sheikh Nasser Khan, son of Sheikh Nasr Khan, son of the son of Sheikh alias Sheikh Daryabeigi son Moses. He poets and scientists of the thirteenth century and early fourteenth century AH. (His ancestors for years from the king of the Safavid government had Bushehr) He was born in opioid early education was in the city of Shiraz way to study and complete payment of their knowledge. He later went to India to stay in the city in 1308 AD during the reign of Shah Qajar Court in printing his poems “Det Persaud Press” Bombay published. The Court of couplets of love letters, odes and sonnets and quatrains and a faith which altogether involves 9072 bits of poetry. His eloquent Persian poets Rumi is another one called Get Anwar mix that still has not been published.

Sheikh Mohammed Khan was born in Kazeroon divine, and after studying the basics, the way Shiraz and Tehran, and in those cities, especially in Shiraz to continue and complete the payment of their knowledge. Persian and Arabic literature excelled in his time were poets and litterateurs and erudition and mysticism mingle with the people joined the search.

Court Yazidis in the port of Mumbai twice published a version of the line Mirza David Shirazi, the printing house Det Prsadprys Mumbai, in the fourth Rabi al-Awwal 1308 AH to print receipts and includes Couplets ((Love Letters) ) and ((H a)) and ((odes)) and ((lyrics)) and ((quatrains)) is divine, and the time is 9702 bits. The first part of the Divine Court Masnavi ((Love Letter)) form. The Masnavi of Providence in 1305 AH and is written for four months.

Love is a 80 page insert and includes 77 solar system and that of these, 34 system where ((story)), and 29 system of ((allegory)), and the rest of the chants and prayers of the Prophet (PBUH) and Imam Ali Ali ibn Abi Talib (aS) and so on. What initiation update or Khtamh Bhl Nkvysh name ((Love is a)) Total number of lines Masnavi ((Love Letter)) 2792 bits. It begins with the poem Masnavi:

God, the fiery language of

Klamm to pay a pleasant ten

Serum passionate now, my life is full of pain

The shaving me, Bshkfan Word

And ends with these lines:

King is on gold wire

Yarsh better than the sun and the moon.

Because the name will remain the world Brkamsh

Akhtar gets close to the wind happiness

The second part of the Court of Divine Masnavi ((H a)), which it Rabi al-Awwal 1306 AH, the year after the Masnavi ((Love Letter)) wrote: Hsnsh Chu was Abtdav do / Bnhadm ((H a )) his name Masnavi 61 insert pages and includes 35 poems from this 22 system where ((story)) and 12 verses of hymns and prayers of the Holy Prophet (PBUH) and Imam Ali (aS), etc., as well as a ((Flight a)) is. Masnavi ((H a)) bits together in 2198 and consists of events of creation and expression of several famous hadith ((Kent Ginza secret)) is. ((H a)) Divine begins with these lines:

Including the existence of a class

Ornament of the Emerald kindergarten

Barry performs as the beginning

The referee is not binding

At the end of it reads:

It was cute and having uncovered

From that moment it was seen treasure

We Bnhadh the hearts of the suffering

Given the suffering of our lives Wind

Four parts of divine justice ((lyrics)) with 333 sonnets up to 95 pages and the time is 3220 bits. Finally, for lyrics Izadi, from Page 95 to the end (Page 109) 119 quatrains and couplets in the style of Baba naked 52 has been inserted on either 342 bits. Divine Kazerouni a Masnavi also known as ((Get-Anwar)) that the Court has not been published and I have not seen the Masnavi in ​​place.

Providence last month Shawwal 1322 AH in Shiraz world died and raced toward the rest of the world. His body was buried in the mausoleum of Bibi girls of the city.